Bike the Trail is a 25km cycle ride on the Hutt River Trail, from Harcourt Park, Upper Hutt to Hikoikoi Reserve, at the Hutt River mouth, Petone. This is a non-competitive family cycling event promoting cycling as a fun, healthy, safe means of recreation. The event is run by Activation, the recreation event organizer for Hutt Council.

Wellington VHF Group was again contracted to Activation to provide the radio safety marshal function, to assure public safety during this event. As part of the Health & Safety / Risk Management policy, Activation have identified a number of hazards on the river trail that may pose risks to cyclists. Our radio marshals attend each of these hazard sites for the duration of the event, to provide trail guidance, administer first aid to any casualties, and co-ordinate medical aid, or ambulance, via amateur radio. Our radio net used the 710 VHF radio repeater.

This year the event was run on Sunday 17th March. The trail was generally in good condition. However, in the weeks leading up to the event, Wellington experienced a lengthy dry spell. This caused the trail surface to become loose and dangerous in parts. As observed by the Hutt River Trail Ranger, “the dry weather meant that the trail surface lost it’s bonding, and produced loose gravel, which was particularly dangerous on bends and corners”. 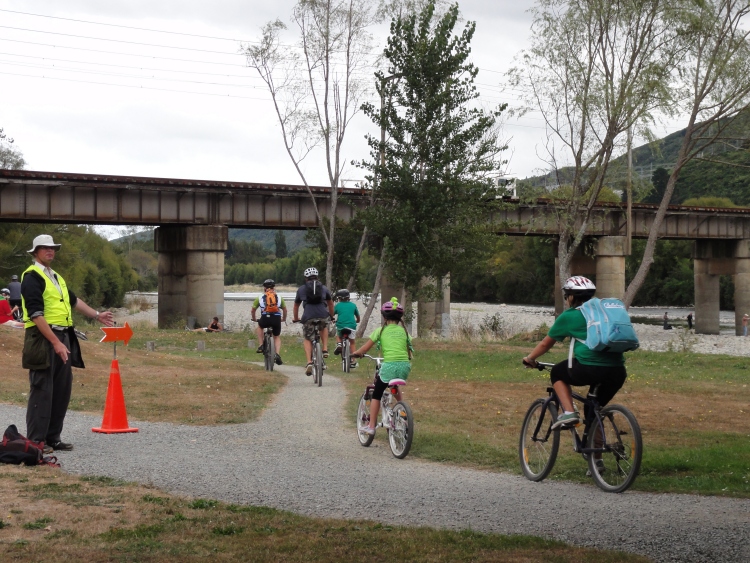 In the spirit of public service, volunteer radio marshal Frank ZL2TTS directs riders onto the Silverstream car-park diversion track, to keep riders from entering the car-park, with the Hutt River and Silverstream rail-bridge in the background.

A net was established using our 710 repeater, which enabled marshals to keep in touch with the organizers through the head marshal, and with each other. Before the event could start Marshal Rick ZL2TVY conducted a roll call of marshals via radio, the result was then communicated to head marshal Dick ZL2TGQ who advised the start organizer, who then released riders onto the trail.

The event was considered to be a great success, with over 1000 riders participating. Notwithstanding the loose gravel on some parts of the trail there were no serious incidents this year. Our first aid duties were limited to attending to quite a number of grazes and bruised egos, the results of spills on the loose gravel.