Administration of the VHF and above contests has been taken over by Auckland VHF Group, the current rules can be found at http://www.nzart.org.nz/activities/contest-rules/rules-vhf-and-above/ The rules below are maintained for historical reference These are the rules for VHF-UHF-SHF Contests, as administered by the Wellington VHF Group. A PDF edition (130K) is also available.

CLAUSE 2. Definitions QRP shall mean a transmitter operating at an output power of 5W or less. A Field Station is one where all equipment, including power sources, antenna systems and operating shelters are taken to the site, and no other facilities are used. Light. Electronic signal generation, modulation and detection, shall be used on all bands, including between 400 THz and 750 THz (light).

CLAUSE 3. Crossband or repeater contacts
Crossband contacts, or contacts through repeaters, are invalid in these contests.

CLAUSE 4. Time
All contest periods begin and end on the hour. Use time signals from a reliable source.

CLAUSE 5. Operation site
Stations may use only one site for the duration of the Contest, but may move to shelter within one kilometre. Any greater move requires a scoring restart. Two, or more, stations in close proximity may only participate if the stations are erected and operated entirely independently throughout the Contest.

CLAUSE 6. Teams
Team operation is advisable on field sites, for safety. No member of a team that has set up and operated a station may earn points for that station by making contact with that station.

CLAUSE 7. Call-signs
Only one call-sign may be used by a station for the duration of the Contest.

CLAUSE 8. Repeat contacts
No station may be worked twice in a period on the same band, nor may consecutive contacts be made on that band to the same station, bridging a period change, unless the other station has worked a third station, if available, in the interim. There shall be a period of, at least, 5 minutes between contacts, if a third station is not available.

CLAUSE 9. Contact Serial Numbers
Contacts must be fully two-way. Serial numbers must be correctly exchanged and acknowledged, before points may be claimed. The serial number is made up of RS(T) plus a three digit number.

CLAUSE 10. Station location
Location details of contesting stations must be exchanged on first contact with each new station, especially if mobile, and entered into the log. Stations shall give their location as latitude and longitude, using the NZ1949 Geoid, to within five minutes resolution or full Maidenhead Locator. As the full Maidenhead is only accurate to 7 km, station location shall be given to within 30 seconds resolution, approximately 0.9 km for contacts above 2.4 GHz. "Christchurch" or "Home station" is an insufficient description. The station giving the insufficient description will be penalised.

CLAUSE 11. Logs
Contest logs must reach the VHF/UHF/SHF Contest Manager, Wellington VHF Group, PO Box 12-259, Thorndon, Wellington, within two weeks of the contest, and must contain:
(a) A certificate signed by the chief operator, stating that the station was operated in accordance with the Radio Regulations and these contest rules.
(b) A list of all operators and call-signs.
(c) The station call-sign and operating site, accurately described. Please include an email address for correspondence and a postal address for certificates.
(d) Power of each transmitter used.
(e) Optional supplementary information on conditions and/or equipment used, for publication. This is of value to other contestants, and to the contest organisers.
(f) Separate log sheets for each contest section, in each band, single-sided, showing the following:
(i) Heading, showing Section, Band, Contest, Date.
(ii) Time and (other) station call-sign, for each contact.
(iii) Serial numbers exchanged.
(iv) Other station location (first contact).
(v) Distance in kilometres to other station.
(vi) Claimed score for each contact.
(vii) Running score per sheet, total for band, with any bonus points. Each section, on each band, is a mini-contest, please log them that way.
(g) An email address for results, if you don't want to wait until the results are published in Break-In, HQ InfoLine, Q-Bit and Spectrum.
(h) Check logs are welcome.

CLAUSE 12. Scoring
You must score your own log, as detailed below. For ease of scoring, the use of a map with a scale of one to one million, such as InfoMap 265, or similar, is suggested. At this scale 1 mm = 1 km. 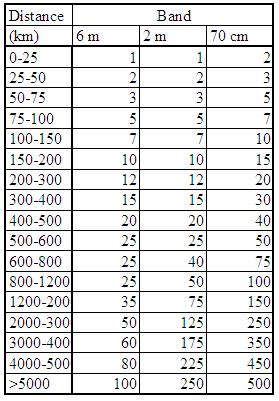 CLAUSE 13. Bonus Multipliers (in order of application)
There are no multipliers for “manual” modes such as: CW, AM, SSB, FM and digital voice, etc. Multiply the basic score by 1.5 for “machine” modes such as: RTTY, ASCII, AMTOR, Packet, SSTV, ATV, etc. QRP. Multiply previous score by 1.5. Stations may use QRP on some modes, and/or bands, and high powers on others, with multipliers calculated on a contact by contact basis. The establishing of a contact on high power, then reducing the power for scoring purposes, is not permitted. Field Station, as defined in Section 2 of these Rules - multiply previous score by 1.2.

CLAUSE 14. Discussion
The ruling of the Contest Committee is final, and no discussion will be entered into. END June 2006 Edition Updated to February 2010; Change notes the Low Band contest may be deferred by 1 week if it clashes with Easter, as well as with the VHF Convention. This is as promulgated in the NZART Infoline on Sunday, 7 February 2010.