The BBS had been temporarily housed by Paul ZL2BEZ at his own QTH since the lease ran out at the previous location, (thanks Paul). The committee decided to relocate it to a more permanent site, firstly to free Paul to do amateur radio again, and secondly to reinstate the 2400 Baud service, which had unfortunately had to be temporarily discontinued. 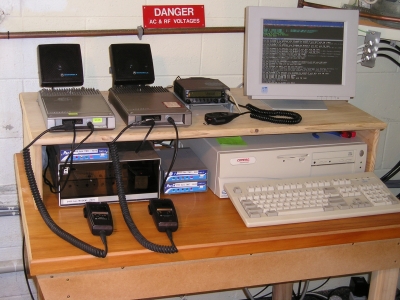 A project team, comprising Paul ZL2BEZ, Dick ZL2TGQ, and Jim ZL2UGD was set up, and a budget approved.

Jim used his carpentry skills to design and make a suitable table and shelves to house all the equipment.

The 6625 repeater is situated at Hawkins Hill 12.5km distant, the 7075 repeater is located at Colonial Knob 8.0km distant, and the 900 node is situated at Mt Belmont 6.1km distant. So the link paths were modelled and subsequently two 5 element VHF Yagi antennas were purchased. Baluns for the two specific VHF frequencies were constructed and optimised. Good performance was attained.

The existing UHF Yagi, kindly donated by Leon ZL2AOC, was used for the link to the 900 National System node. Although this path is badly obstructed by a ridge at the BBS end, good performance was obtained.

The VHF transceivers and power supplies were commissioned on Tuesday evening, and the balance of the equipment was installed the following night. Commissioning tests revealed that all was well and the BBS was then switched into full service at midnight on Wednesday 4th August 2004.

This article was originally published in Q-Bit, issue August 2004.

MAROANUI NATIONAL SYSTEM OPERATIONAL - MARCH 2008 This was a joint project with Taupo Branch to establish a node on Maroanui, located north west of Taupo. The project involved;